Find out more about what Springhouse has to offer. Schedule a Private Tour

Signup for our newsletter to receive via email the latest news and events happening at Springhouse. 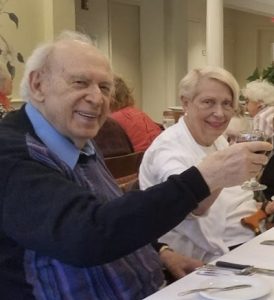 Tania and Jerry became residents of the Springhouse independent living after moving from Brookline in 2013. Jerome “Jerry” Friedman was born in Chicago to Russian parents. Jerry discovered a love of art while in high school and was later offered a scholarship to the Art Institute of Chicago.

While still in high school, Jerry read ‘Relativity:  The Special and General Theory’ by Albert Einstein and an interest in physics was sparked. Jerry attended the University of Chicago for his undergraduate degree and subsequently entered a rigorous graduate course in the Physics Department, known as the Great Books Program.  It was so demanding that by the end of his first year, 100 of the original class of 135 students had left the program. Jerry was given the opportunity to work in the labs of famed physicist Enrico Fermi. Though Fermi died while Jerry was still completing his thesis, the time that he spent in Fermi’s labs was an incredible learning experience for Jerry, and he cites it as one of the most exciting and meaningful memories of his lifetime. Jerry received his PhD in Physics in 1956 and then went to Stanford for post doctorate work.

In 1960, Jerry began working at MIT for what would be an illustrious 46 year career, acting as the Head of the Lab for Nuclear Science and the Head of Physics. While working at MIT, Jerry was able to commute to Stanford in order to be part of experiments at the Stanford Linear Accelerator Center with Henry Kendall and Richard Taylor. Through their work, they we able to prove the existence of quarks – a type of elementary particle. Quarks has previously been theorized about, but had not been experimentally proven prior to these experiments. Quarks became a new fundamental building block in physics. For this work, he would eventually be awarded the Nobel Prize for Physics in 1990, along with Kendall and Taylor.

Throughout his lifetime and alongside his incredible career in physics, Jerry has continued to pursue his love of art. He continues to paint and enjoys theatre as well. When asked how he viewed the similarities between art and physics, Jerry stated that both art and physics seek to describe nature, but do so in different ways. According to Jerry, art does this without limitations and with great subjectivity, while physics is bound by the laws of how things actually work. Jerry stated that the beginning stages of new ideas are very similar in art and science, as they both require great creativity, and the pursuit of new concepts.

His wife, Tania was born in New York City to a Russian father and a mother from Paris, France. Growing up, Tania studied both ballet and piano.  Eventually, she was drawn away from these pursuits by a growing interest in medicine. She subsequently went to school to be an x-ray technician, which she pursued as a career for several years, doing the x-rays for Dr Burrill Bernard Crohn, discoverer and namesake of Crohn’s Disease. Eventually, a growing concern about exposure to radiation brought Tania to the decision to leave the field of x-ray technology.

Next, Tania spent some time dabbling in television, first for television host Sunny Fox and then quiz show Break the Bank. She spent some time working for the Thoroughbred Racing Association, which was headed up by an ex-FBI agent and designed to make sure that horse racing was in accordance with the law.

After this, Tania began working for Harvard Medical School as Administrator of the Admissions Office. Tania got to know many young and aspiring doctors and some of the students she worked with even became future doctors of her own! Tania continues to enjoy attending ballet, as well as theatre, and also enjoys museums, music, and reading. Tania is also a gifted sculptor.

Tania and Jerry eventually found each other for a very unlikely reason – a car accident! While on the way home from work Tania’s car was hit from behind. An unlikely friendship developed with the woman whom she had the accident. Coincidently this woman was a friend of Jerry’s as well, and would later introduce the two to one another. The rest is history!

Jerry continues to travel, gives presentations on physics and the environment,  serves on boards and meets with students. And Tania still adores the arts.